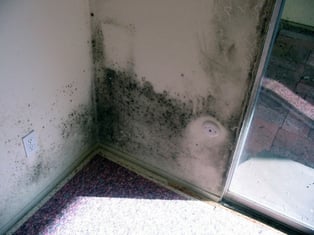 Planning ahead is essential since finding things out the hard way is usually more expensive in the long run. When contracting work, the most important function is getting the bid right the first time. If you don't get the takeoff right, you're likely to lose money. This situation was the case for one roofing contractor whose lack of adequate materials led to damaging mold growth in a condo complex. Unfortunately, mistakes like this can potentially cause more damage than the project is worth. With emerging data-enabled solutions such as aerial roof measurement and digital estimating platforms, contractors can now use technology to bid on construction projects more accurately every time.

It all began when a contractor was hired to remove and replace the roofing system on a large multi-family complex built in the 1970s.

The original gutters were removed to prepare for the replacement of deteriorated facia. Unfortunately, the contractor didn’t order enough material to complete the project, so by the time the additional material arrived, the rain had caused mold growth in several condo units. Mold was actively growing, but where was the moisture coming from? Moisture readings were taken from the concrete slab at the perimeter and center of all the rooms resulting in high perimeter readings yet normal central readings. Drywall moisture readings were also taken to compare against a baseline reading. Although the drywall moisture levels registered higher closer to the concrete floor, those levels were not considered high enough to promote mold growth. In addition, all studs, base plates, and stucco were tested with no abnormal readings.

Moisture was migrating into the building and evaporating into the air. Then, the drywall began absorbing surface moisture as the relative humidity rose, creating a damp and ideal environment for mold production. However, those areas of heavy mold growth on the drywall occurred not because of core drywall moisture but because of lower surface area temperatures, which allowed moisture to condense and hydrate mold spores.

The relationship between mold and surface temperatures means that the colder the surface, the higher the relative humidity. Solar radiation warms the exterior wall surfaces, creating temperature gradients from the exterior to the interior. Dependent on the temperature, air can hold varying amounts of moisture in the vapor state. Warming of the interior wall surface, which occurred in the second bedroom due to an increase in direct sunlight, allowed ambient air to hold more moisture. This action prevented condensation on the lower part of the wall, which explains the absence of mold in the second bedroom. 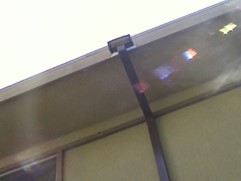 Let's think about the origination of the moisture in the first place. Where did that moisture come from? The topography around the perimeter of this property shows that rainwater inevitably flows towards or bounces onto the building foundation. Rainwater is deposited on the lower exterior area of the building due to splashback—rainwater bouncing off the ground adjacent to the building. Therefore, the rainwater from the roof must be captured and diverted away from the building. The Capillary Water Movement diagram shows how rainwater can splash back against the stucco and the foundation. The splashback is further exacerbated by capillary suction. 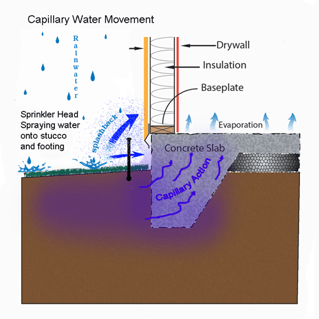 Capillary suction refers to a major moisture transport mechanism that moves moisture into porous materials. Capillarity is a function of, among other things, pore size and available moisture. If pore size in a material is small, such as in concrete, then capillarity is possible. Capillary water is drawn into the footing and then into the perimeter concrete slab. Once in the slab, the capillary water can evaporate into the interior of the building enclosure. Source control will best stop mold production by minimizing water infiltration through corrective repairs. The following repair recommendations will minimize moisture intrusion on the property.

Replace gutters around the perimeter of the building

Attach downspouts and properly divert away from the building

Keep landscaping trimmed back away from stucco wall at weep screen

Construct proper grade slope diverting water away from the building

One Click Contractor will help reduce costly mistakes. This full-service easy-to-use sales enablement platform was created "by contractors for contractors" with the highest level of accuracy, simplicity, and efficiency in the industry. With One Click, contractors will know their numbers are spot on and that they ordered the correct amount of material every time.

The only all-in-one sales platform for home improvement contractors’ latest partnership will extend...

In the United States alone there are more than 496,000 remodeling contractors. Like any profession...